This development is supported by the French National Agency of Research (ANR), via the "Snow White" project (ANR-06-BLAN-0396-01). It is currently not part of the main Yade source, please contact Bruno Chareyre for more information.

A novel Discrete Element Method (DEM) employing polyhedral elements based on experimental data is developed. It is implemented in an algorithm that simulates a dynamic model of creep deformation based on observed snow grains packing. The model uses a grain-scale algorithm that requires geometrical input parameters from a three-dimensional (3D) scans of the observed snow grains packing. The 3D high resolution image was obtained from scanning a cylindrical snow specimen using Synchrotron X-ray Diffraction Contrast Tomography (DCT) technique. 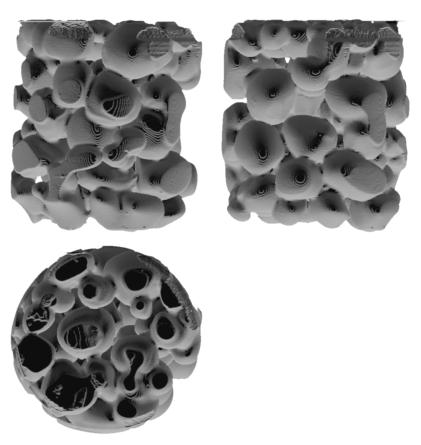 A reconstruction algorithm is used to convert tomography data into a set of grains, represented as a set of parallel layers. The orientation of layers correspond to crystallographic planes, and the layers can slide relative to each other according to a viscous creep law, thus simulating the deformation of mono-crystaline ice grains.